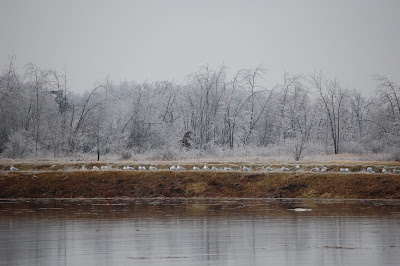 The angel of the Lord appeared to Joseph in a dream and said, "Joseph, son of David, do not be afraid to take Mary your wife into your home. For it is through the Holy Spirit that this child has been conceived in her. She will bear a son and you are to name him Jesus, because he will save his people from their sins.

There are many cultures where dreams are respected or revered. Generally, ours is not one of them. My mother used to dream of her loved ones that had passed away rather frequently, especially her parents. They would even tell my mother things in her dreams. My husband dreams vividly and his mother does as well. Often they will call one another to say that they had both dreamed of a family member on the same night. I rarely dream of deceased loved ones.

I do have dreams about my mother though. I have dreamed about her 3 or 4 times since she passed away in June. In my most recent dream I was on a swing hanging from an interior doorway. When the swing went backward I was in one room and when the swing went forward I was in another room. My mother was in front of me dressed in a familiar sweater. I could see her face and she was saying, "I will see you when you get here."

It was so comforting that I woke with tears. My faith sometimes wavers. I had been wondering if I would ever see her again. Honestly, it's so hard to believe that one day we will all be together again. It's such an unbelievable story. It's as if you tell someone about a dream and they don't take it seriously because, "it's just a dream."

Joseph did not think like that. He faith was so strong that he believed in his dream even though it must have sounded unbelievable to him.

And so, my faith is also renewed. I believe that one day I will see my mother again and we will rejoice.